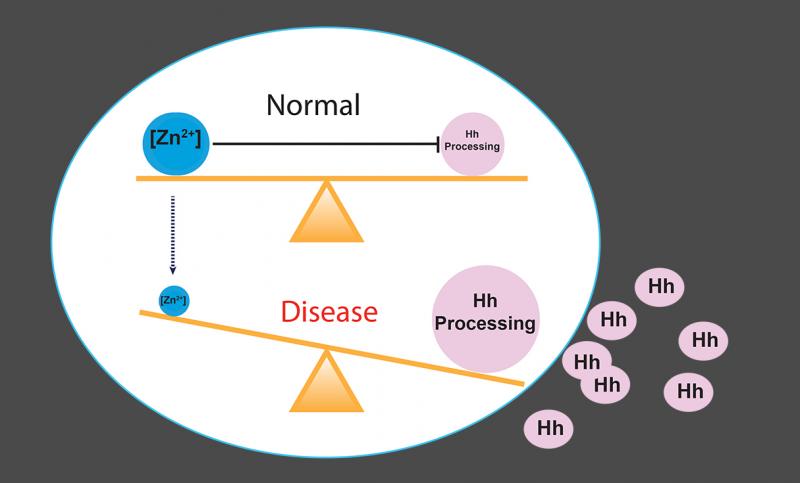 Zinc deficiency has been long associated with autism, and various types of cancer, like lung, prostate and ovarian cancer.

According to the Rensselaer Polytechnic Institute, it can also reactivate a certain biomolecular process, which has an essential role in general development, and diseases as well.

“Hedgehog” is a growth determining factor, but in adults it can cause uncontrolled cell growth and cancer proliferation. A research published in the “Journal of biological Chemistry” found that zinc inhibits this process by binding to a part of the protein precursor that activates this process.

“Hedgehog” is a key regulator of cell growth and development which helps in establishing normal bilateral symmetry of the body. The process starts when the protein precursor activates and divides into two parts; the first part activates signal molecules that mark the start of the “Hedgehog” process, and the second part is a catalyst for the self-division process.

This process does not require any external catalyst, because one part of the protein precursor acts as a catalyst for the transformation.

Researchers have revealed that, when present, zinc binds to the active part of catalyst and inhibits any auto-process in the protein precursor, and the signal molecule as well.

Zinc deficiency is associated with autism, and some types of cancer. For instance, prostate cancer is accompanied with lack of zinc in prostate tissue. However, scientists still have not revealed the actual relation between zinc deficiency and cancer.

“This research has revealed another, additional mechanism which explains how zinc deficiency leads to cancer development. Nobody has succeeded to prove anything similar.

Zinc and Hedgehog are essential and beneficial biomolecules, and their connection may provide deep implications to normal physiology, and diseases as well,” explain researchers.

Is cancer growth in last decades associated with lack of certain nutrients in diet? Zinc deficiency is just one part of the puzzle, but next time someone suggests you to try certain diet, think twice, because there is nothing better than balanced and versatile diet.

10 Things That Happen When You Start Running