Earlier on Thursday, a young man was electrocuted while he was trying to save his horse from ‘catastrophic’ floodwaters in Texas.

The message from his family shared by the Jefferson County Sheriff’s Office, the 19-year-old man drowned and was electrocuted while trying to move his horse to safety during the remnants of Tropical Storm Imelda. 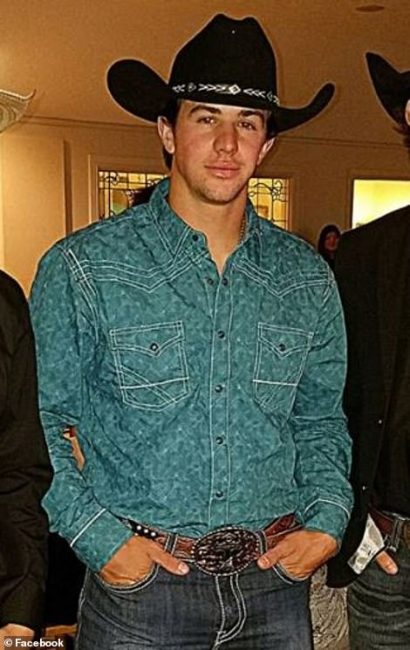 According to Crystal Holmes, a spokeswoman for the department, the death occurred during a lightning storm.

The Sheriff’s Office identified the victim as Hunter Morrison and this is the statement he shared from the Morrison family:

“From the family of Hunter Morrison,

Hello everybody. Right now my family and I are going through one of the most horrific times in our lives with losing Hunter. Thank you for all the kind words and phone calls I have received over the past 8 hrs but I do want to clarify something…he wasn’t “saving” people. He was trying to move his horse, got electrocuted, and drowned.

I wanted to make that known because I have had news people call me and want the story. I am not upset by any means but I just want the facts to be straight and not give him a sense of false heroism. Thank you for your kind words and if you hear the story being told wrong…please correct them. Thank you

The Jefferson County Sheriff’s Office has received calls from all over the country in reference to the tragic death of young Hunter Morrison. We will let his family’s statement stand. His family asks for privacy while they grieve.”

Sheriff Gonzalez reported that a man in his 40s or 50s drowned while trying to drive a van through 8-foot-deep floodwaters near Bush Intercontinental Airport in Houston during the Thursday afternoon rush hour. Despite floodwaters that were 8 feet deep, the driver decided to pause shortly and then accelerated into the water, submerging the van.

Rescue crews came to the spot, removed him, and started resuscitation efforts en route to the hospital, but the man was pronounced dead there.

Tropical Depression Imelda has devastated parts of Texas, and according to local authorities, the flooding is ‘worse than Hurricane Harvey’, which was the most extreme flooding event in US history.

The city’s mayor, Sylvester Turner, reported that by Thursday night, floodwaters had started receding in most of the Houston area.

Houston Police Chief Art Acevedo said that law enforcement officers intended to work well into the night to clear freeways of vehicles stalled and abandoned because of flooding.

Officials in Harris County said there had been a combination of at least 1,700 high-water rescues and evacuations to get people to shelter.

According to Harris County Judge Lina Hidalgo, the rescues took place in the eastern part of the county because of flooding. Officials are urging the public to stay off the roads and the sheriff, Ed Gonzalez, most of the rescued people couldn’t escape their homes. Among them, they rescued nine children and employees from a daycare center that had taken on water in Aldine, about 10 miles north of Houston.

Also, at least one hospital was evacuated, and more than 900 flights were canceled or delayed in Houston.

Governor Greg Abbott declared a state of disaster in 13 counties, saying it “has caused widespread and severe property damage and threatens loss of life’. He added that the state is working with local officials and emergency personnel to provide the resources need to keep people safe from the storm.

Following Harvey, he ordered a report warning that punishing storms would become more frequent due to a changing climate, as experts claim that climate change is responsible for more intense and more frequent extreme weather like storms, droughts, floods, and fires.

However, without extensive study, they cannot directly relate the changing climate to a single weather event.

Climate change skepticism runs deep among Republican leaders in Texas, and Abbott said he cannot say whether he believes manmade global warming is causing this kind of disasters. Yet, earlier this year, he approved billions of new dollars to fortify the Texas coast and minimize catastrophic flooding. 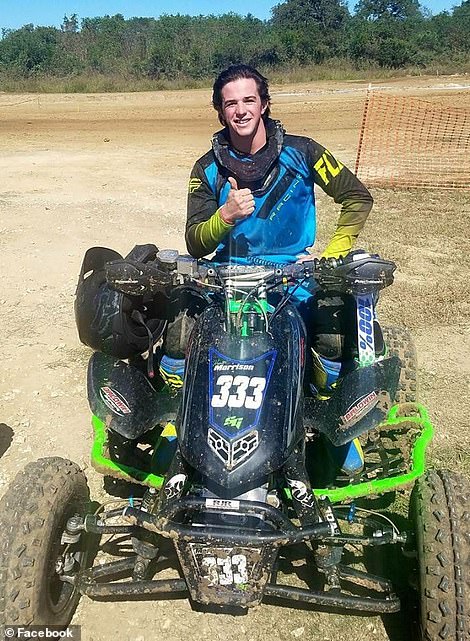 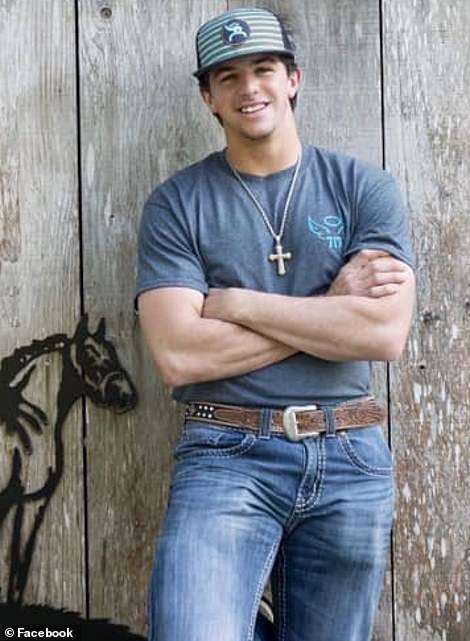 Crews have rescued over 1,000 people in the Houston area 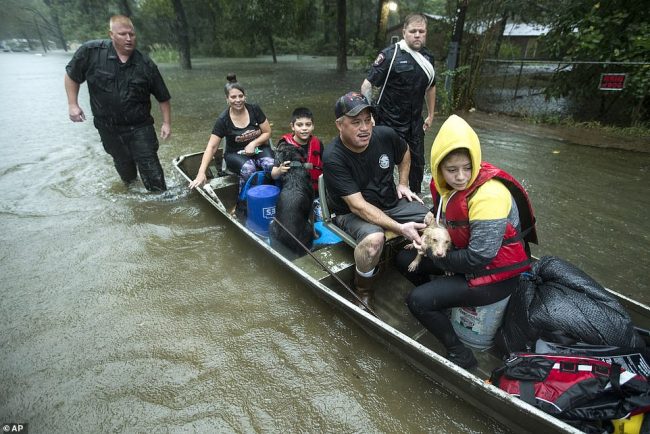 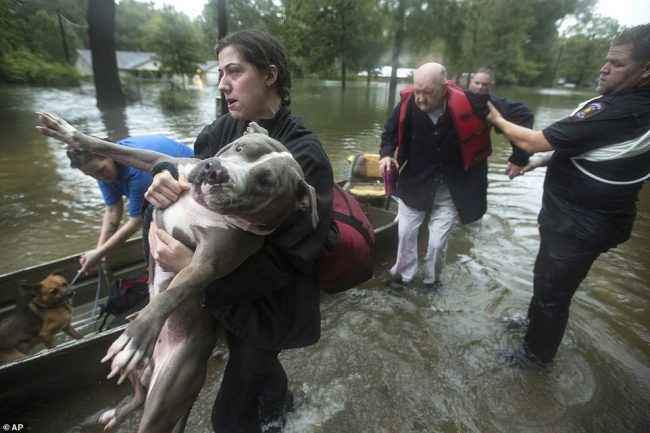 The county’s sheriff, Ed Gonzalez, reported that among those rescued were nine children and employees from a daycare center that had taken on water in Aldine, about 10 miles north of Houston 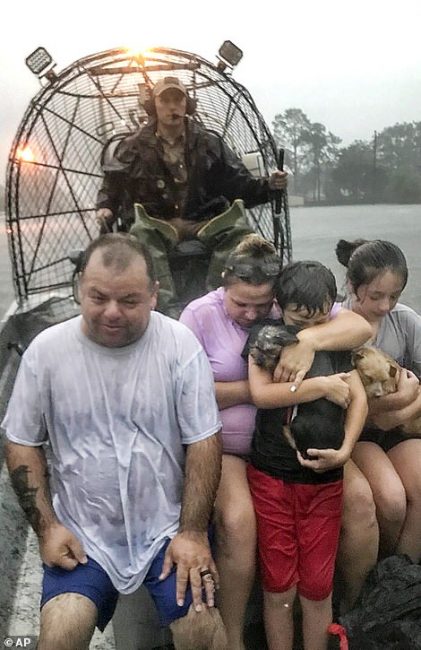 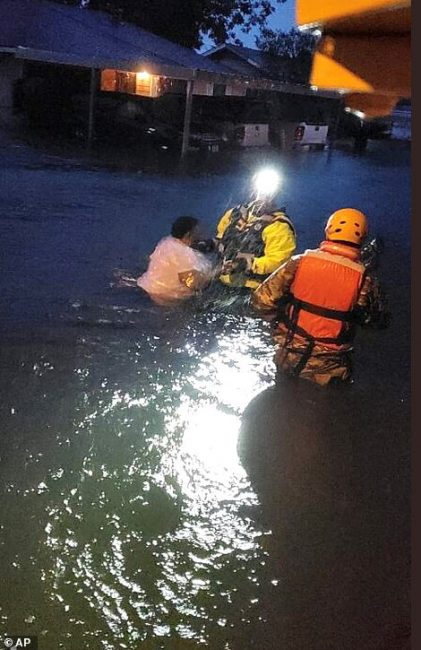 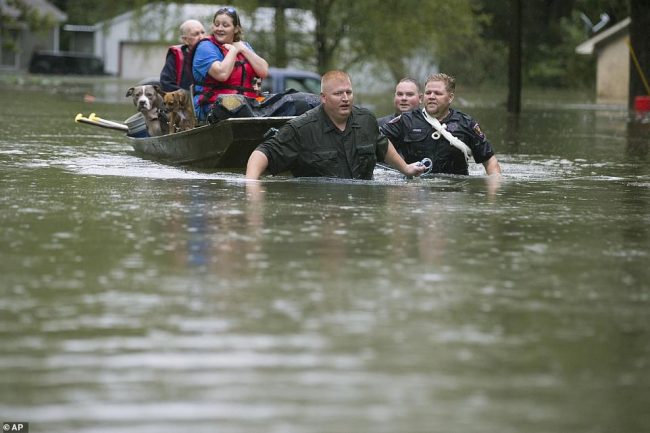 A man wades out through floodwaters due to heavy rain spawned by Tropical Depression Imelda inundated the area on Thursday in Patton Village, Texas 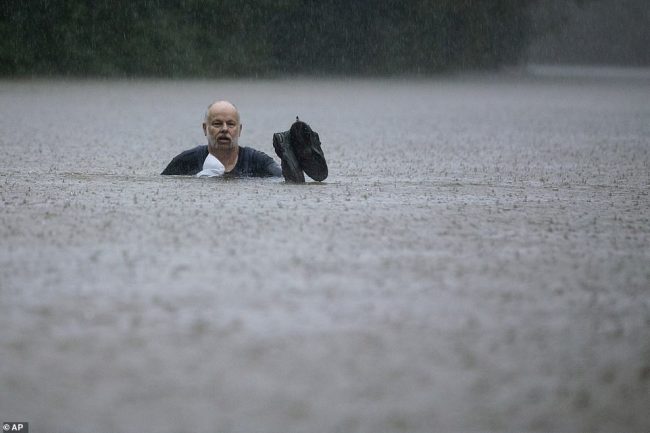 Forecasters are afraid that the tropical depression could bring up to 40 inches of rain. Two cars became stalled in high water on 37th Street in Galveston, Texas 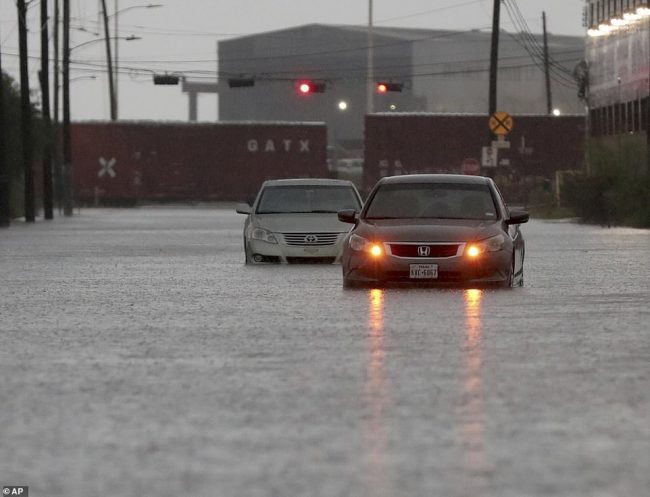 Imelda has battered some areas of Texas with up to 28 inches of rain, and forecasters are still warning that the tropical depression could bring up to 40 inches of rainfall in some parts.

According to Chambers County Sheriff Brian Hawthorne, emergency personnel completed over 300 high-water rescues Thursday in the town of Winnie, which is 60 miles east of Houston. Water was inundating several homes and business, and a hospital was evacuated there.

‘What I’m sitting in right now makes Harvey look like a little thunderstorm.’

Houston- A man sits on top of a truck on a flooded road on Thursday. Houston Fire Department members brought him a life jacket and walked him to dry land 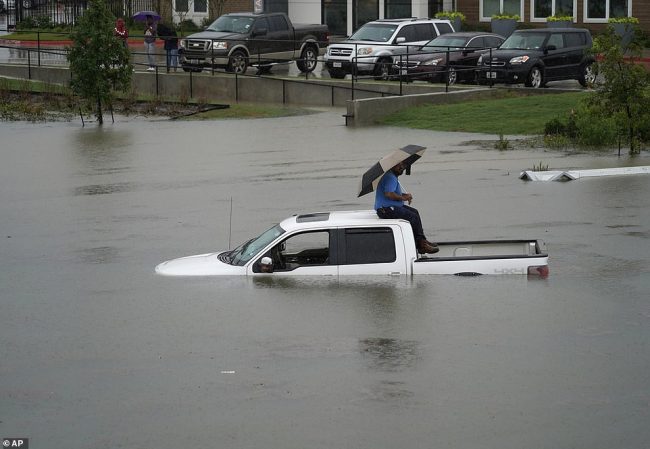 Houston, Texas- Cars pull to the side of the freeway of Highway 69 North to get by the floodwaters on Thursday 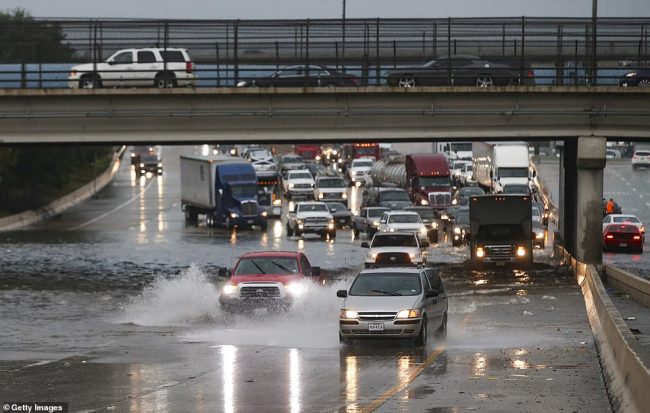 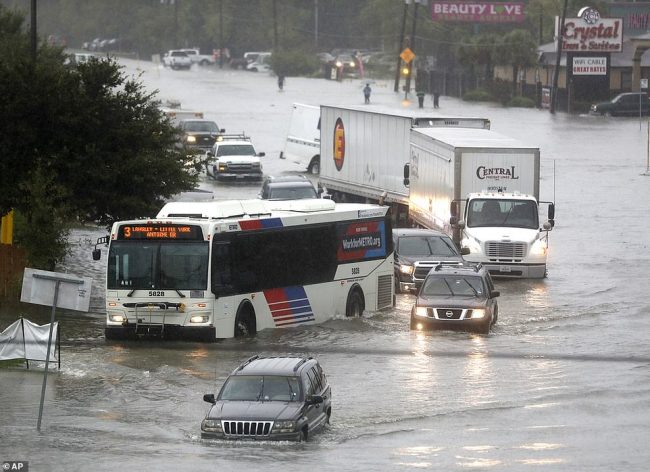 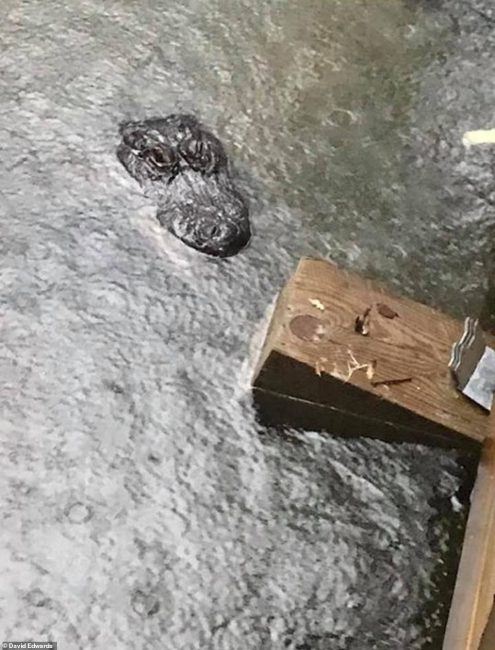 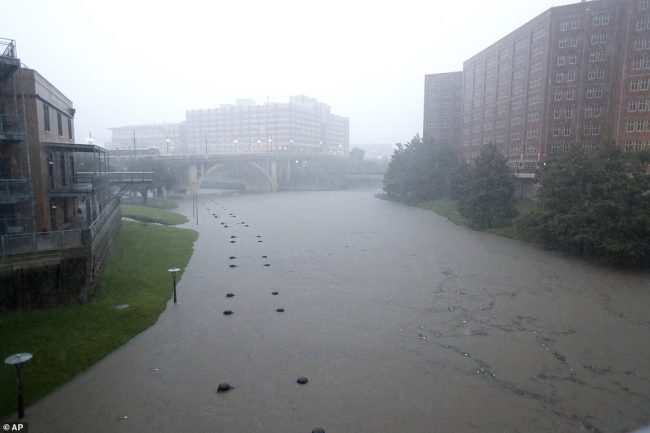 The situation is the worst east of Houston, and local officials claim the rainfall Thursday led to flooding worse than what happened during Hurricane Harvey.

Hawthorne reported that emergency workers rescued about 200 people overnight, and airboats from the sheriff’s office and the Texas Parks & Wildlife Department were helping with the rescues, along with high-water vehicles.

He explained that the town ‘looks like a lake,’ so he added that he would like people to pray to stop raining.

All service roads were impassable and two hospitals were inaccessible in Beaumont, a city with about 120,000 people, that’s about 30 miles from the Gulf of Mexico.

Beaumont police reported that 911 has received requests for over 250 high water rescues and 270 evacuations.

Jefferson County Judge Jeff Branick said that those homes that were not flooded in Harvey are flooding now.

The worst of the flooding is east of Houston 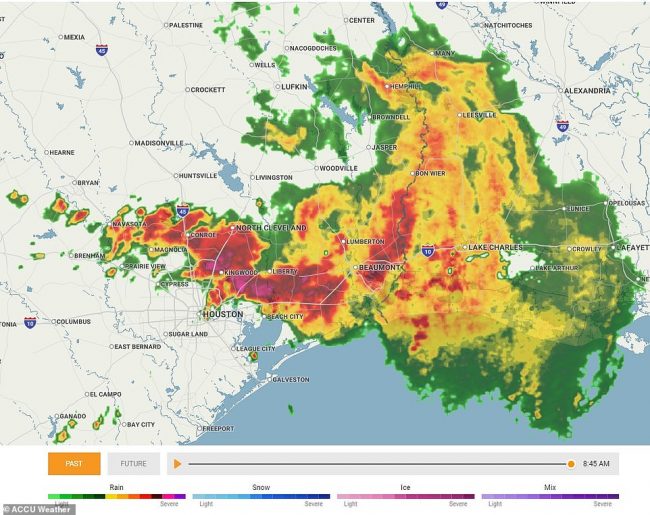 The NWS issued a flash flood emergency for several counties 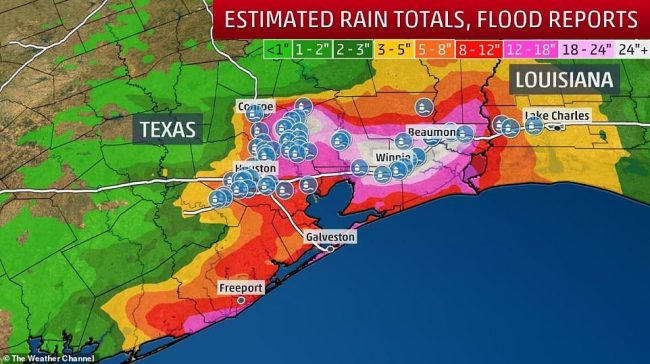 Flooding was reported in Beaumont, and homes that did not flood during Hurricane Harvey are now flooding 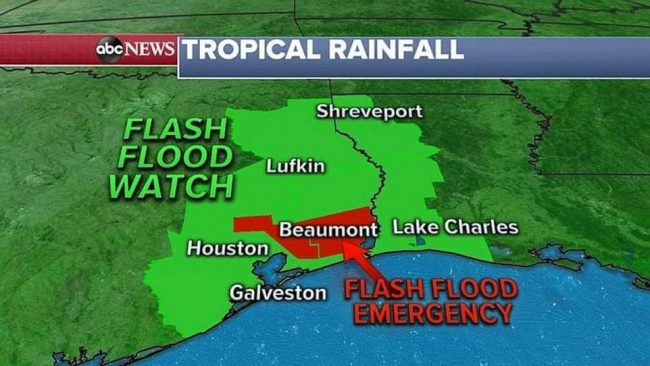 Newly formed Hurricane Lorena was perched right on the coast of southern Mexico, threatening to cause flooding 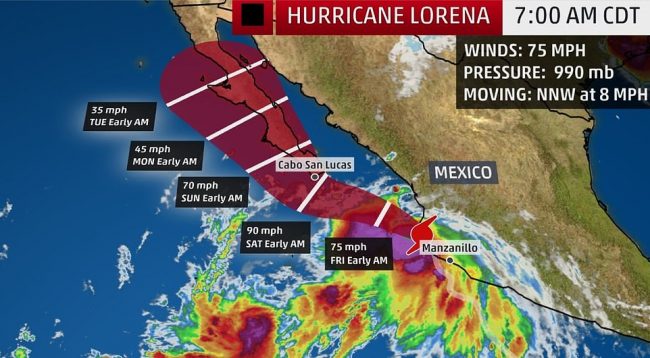 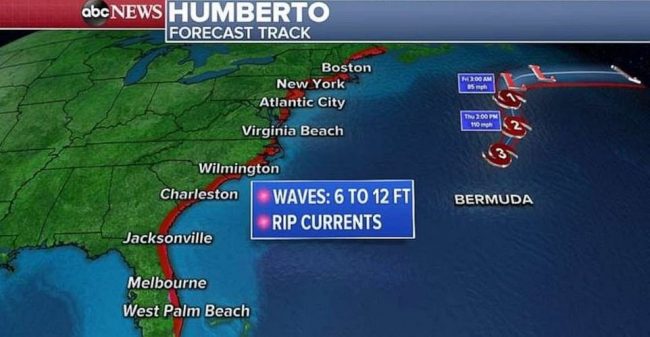 Residents have reported spotting of the 300-odd alligators from Beaumont’s Gator Country in their properties. Yet, the center advises them to leave them if they are displaced and not causing danger or in danger, and they will move on once the water recedes. They also added that they should be contacted if one comes across an alligator that is in danger or could be a threat.

The National Hurricane Center informed that Imelda’s center was about 110 miles north of Houston early Thursday and was moving north-northwest at 5mph.

In the Baytown area, about 25 miles east of Houston, thunderstorms spawned several weak tornadoes which damaged trees, barns, and sheds and led to minor damage to some homes and vehicles.

Rainfall hit coastal counties, including Brazoria, Matagorda, and Galveston, and Sargent, a town of about 2,700 residents in Matagorda County, had received nearly 20 inches of rain since Tuesday.

Coastal counties were hit hard by rainfall through Wednesday. Sargent had received nearly 20 inches of rain since Tuesday 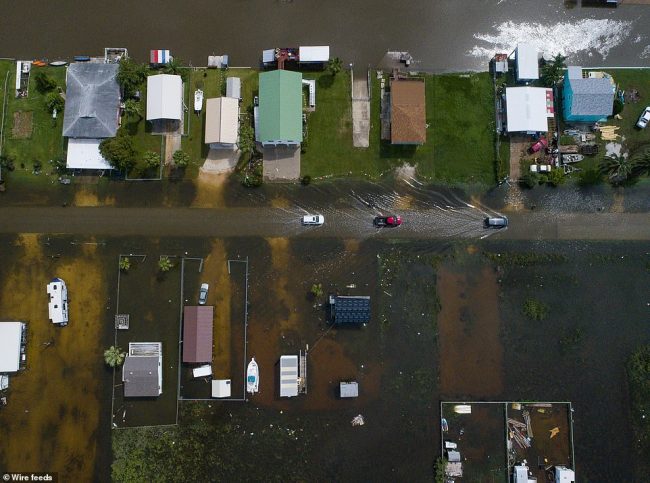 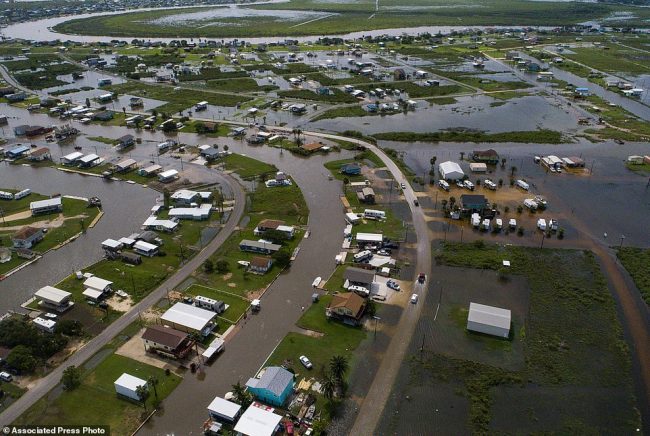 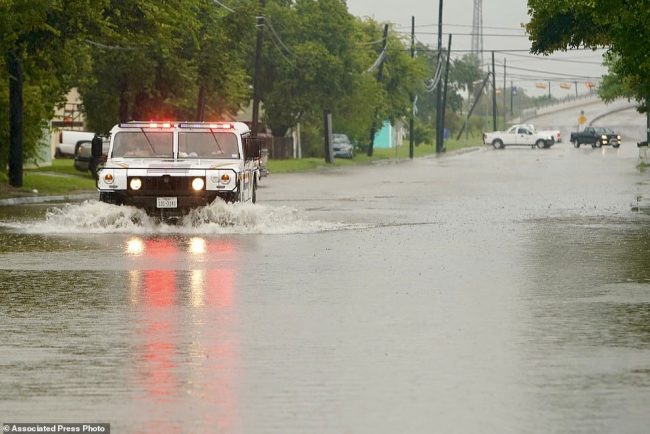 In the Houston area, the rainfall flooded some roadways, stranding drivers, and caused several creeks and bayous to rise to high levels.

According to the NHC, Imelda weakened to a tropical depression after making landfall Tuesday near Freeport, Texas, with maximum sustained winds of 40mph.

Meanwhile, Hurricane Humberto blew past the British Atlantic island of Bermuda and blew off rooftops, toppled trees and knocked out power. However, officials reported that the Category 3 storm caused no reported deaths. 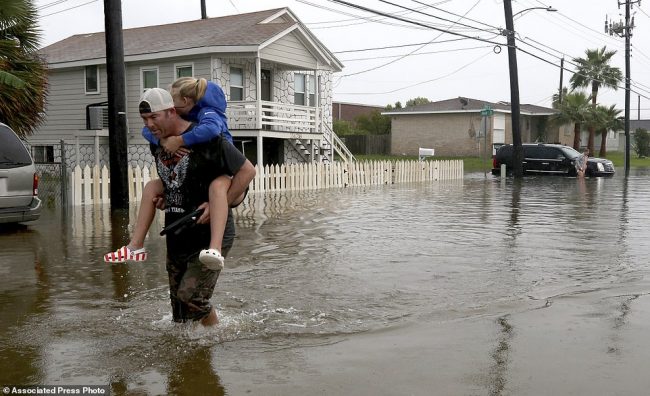 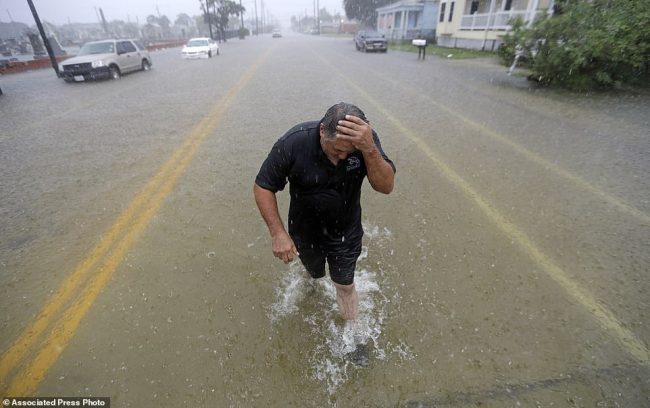 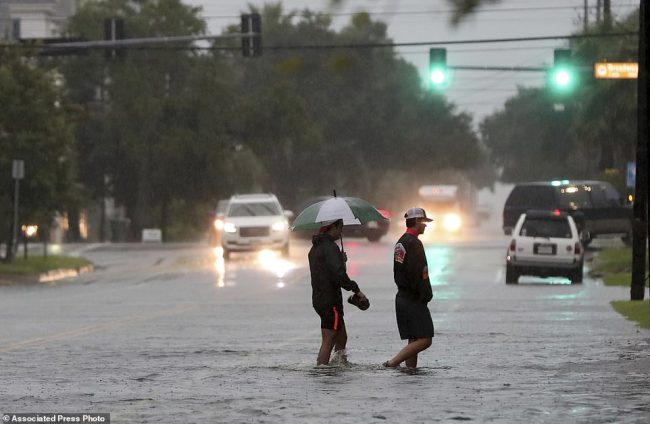 Galveston, Texas- A postman walks through the flooded streets from Tropical Depression Imelda as he delivered mail 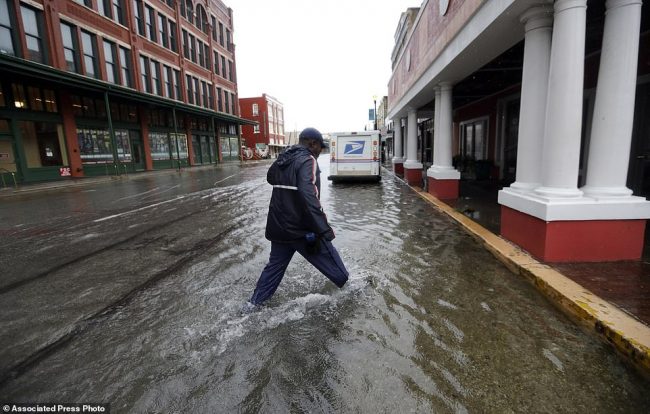 The hurricane had winds of about 120 mph at its nearest approach to Bermuda Wednesday night.

He added that in the morning, 28,000 customers on the island of 70,000 people remained without power.

The NHC informed that Humberto still had maximum sustained winds of at 125mph early Thursday, with tropical storm-force winds extending outward for 405 miles, covering a huge swath of ocean off New England and Nova Scotia. The center of the storm was 250 miles north-northeast of Bermuda, while it was moving to the east-northeast at a brisk 22mph.

Newly formed Hurricane Lorena was perched right on the coast of southern Mexico, raising the risk of floods in the area, which has been suffering unusually dry weather.

The storm had maximum sustained winds of 75mph Thursday morning and it was centered about 25 miles southeast of Cabo Corrientes and was moving to the north-northwest at 8mp.

According to forecasters, the storm could bring 5 to 10 inches of rain to parts of the area and Mexican officials are afraid that some parts of southern Mexico could suffer dangerous flash floods and landslides unleashed by torrential rain.

Blanca Jiménez Cisneros, director-general of Mexico’s National Water Commission, said that in parts of Colima, Jalisco and Michoacan states, the total accumulations of rain could represent 40 percent of the rain for an entire year in that part of the country.

As a result, classes were suspended in Colima.

In the Atlantic region, Tropical Storm Jerry strengthened to top winds of 70mph on its way to becoming a hurricane. As it approached, the outermost Caribbean islands were already on a tropical storm watch Thursday morning, and it is forecast that Jerry could be near the northern Leeward Islands and pass north of Puerto Rico.